Secrets of the AO Polanret System – Part I.

I wasn't going to write this piece, at first, but after discovering just how little information there was on this system, I reconsidered. Although the equipment itself seems to be extremely rare, nevertheless, there is much to be learned from simply reviewing why it was created, what it does, how it does it, and how this may actually be useful – even if only as an educational tool. In Part I, we cover the Background and History of the AO Polanret system, and reveal some of its failings. In Part II we will examine the underlying technology and consider what these units may still have to offer.

(Naturally, the opinions expressed herein are those of the author, based on the very limited amount of published material available on this topic, and based on actual use of the system reviewed.) 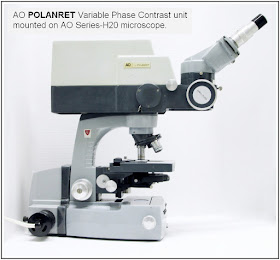 Once upon a time (late 1940's - early 50's) Phase Contrast was the latest wonder of Microscopy, allowing easy visualization of living material – and by purely optical means! It seems like the perfect answer to issues such as whether new, minute structures in cells were naturally-occurring components, or merely artifacts resulting from the various chemicals typically used in the often-tedious and technically difficult sample preparation process.

Phase Contrast appeared to offer a powerful and relatively inexpensive means to observe cells in their natural state, free of chemical treatments and all the skills and technical labor accompanying them. To the folks running AO/Spencer back then this must have seemed like a perfect opportunity to carve out a niche for the Company and even make a name for themselves in this emerging technology. And so, they began their long journey down that road…

Now, back in the early 1950's AO did basically succeed in this endeavor. They certainly made large investments in Phase Contrast technology and produced more different types of Phase Contrast objectives than anyone else – some of which were never duplicated by anyone else, either (e.g: the "B minus" and "A plus" contrast types.)  Unfortunately, their Series-2 and -4 microscopes were not greeted all that warmly in the marketplace and this proved to be a weakness in their grand plan. But, in addition, there was not a great deal of interest surfacing in all their various, "special" types of objectives – perhaps because AO, back then, offered only Achromat objectives for Phase Contrast..

So, in response, AO began considering solutions, including a switch to "infinity" optics and Planachromat objectives, and, perhaps replacing their rather undistinguished 2/4 models with something better. And then the bomb hit!

Nomarski described a new, very different system, based on something called "Differential Interference Contrast,: or, more simply, just "DIC". And, unlike Phase Contrast, Nomarski's new DIC system did not inherently require special objectives and, in addition, offered the promise of even better image quality!

DIC did not require re-desgning objectives and so could (potentially, at least) be easily applied to existing systems, using existing objectives – potentially even Apo's and PlanApo's! So, researchers given, a choice between buying AO's Achromats (for Phase Contrast), or of simply re-using their existing, very expensive Fluorite and Apo objectives, naturally opted for the Nomarski DIC system.

And, with the emergence and growing acceptance of the Nomarski DIC system, the glaring faults and limitations of the older Phase Contrast system became all too apparent.

For example, one of the bigger problems with Phase Contrast was the appearance of "halos" surrounding objects and even some of the internal structures in specimens. Part of this was inherent in the system, but the problem was amplified by the limitations of the optical technology of the day, which limited the actual performance of the objectives.

But, another serious issue was that the contrast characteristics were fixed within each objective, and so, to change these meant replacing the entire objective. Thus users were often faced with needing full "sets" of different types of phase objectives, usually mounted on interchangeable nosepieces to allow rapid switch-overs.

All these extra costs only elevated the price of Phase Contrast to users, and made the superior Nomarski system appear even more attractive. (Note that, in the Nomarski system, contrast characteristics are basically just a simple optical adjustment, with no need to change or even move the objective in use!)

The answer, it must have seemed, would be to "externalize" the Phase Contrast mechanism with yet another piece of equipment. This, at least in theory, would allow users to achieve Phase Contrast results using existing (non-phase) type objectives, while also permitting direct and continuously-variable control over the phase-optical characteristics.

Now, while the basic Concept seemed like a terrific solution, the ultimate Reality was something quite different. And, to be perfectly honest, not all the blame should fall on AO's shoulders.

"Polanret" type systems had been known since the early days of Phase Contrast (ca.: 1947) where they had been described in scientific literature. In fact, a number of variations of the basic concept were described in subsequent years. However, all of these systems employed Polarized light in an arrangement where it could be controlled (adjusted) to vary the characteristics of one or more "phase plates" within the system. Further, an optical system was used to effectively shift the "rear focal plane" of the selected objective into the system, where it could be manipulated as desired.

Of course, all this "accessory" optical technology was not without its own costs, and complexity, and it was not until the 1970's when evolving optical technology actually made them practical. Yet, even when they finally did become commercially available, they failed to displace the then well-entrenched Nomarski DIC system, and they were largely ignored by the marketplace!

To better appreciate this, we merely need to look at some of the practical limitations of AO's Polanret system…

First, it should be stated that AO only sold their system "married" to a specific microscope! In fact, you could only but their Polanret system as part of a package which included a new, expensive H20 (or, later a 120) instrument. Further, even if you already owned the correct model of AO microscope, there was no way you could simple "add" the Polanret unit to it – this could only be done at the AO factory, and only on a new instrument. (The result of this was to effectively double the price of the AO system!)

Apparently the alignment between the Polanret unit and its host microscope was so critical that customers were warned (even in AO's sales literature) not to try to transfer their Polanret unit to any other instrument, even if it was identical to the one originally used. But that is not the worst of it…

AO's Polanret system was strictly limited to just four AO Planachromat objectives – all just "clinical grade". And, surprisingly, the one objective with perhaps the greatest appeal, their 50x/0.80 (oil) Planachromat, was never included in the system… not even as an option!

So, after a great deal of time and effort spent creating their Polanret sysyem, AO totally dropped the ball by making it ridiculously expensive and then restricting it so severely as to make it nearly useless in practice!

Finally, shortly after the AO Polanret system came to market Zeiss offered their DIC system at a similar price, only to be followed by both Nikon and Olympus introducing their DIC systems, at lower cost, shortly thereafter.

Upgrading their Polanret system to the newer AO 120 microscope did little to change the basic equation – the Polanret was just too little, too late, and too expensive for what it did!

Today, given that the system included a special phase condenser (Cat. #2110), and the fact that the various pieces were most likely separated over the years, it seems quite doubtful that there are any complete, fully-intact AO Polanret systems remaining in user's hands, anywhere!

And, as a final, ironic note, the AO 50x oil Planachromat (mentioned earlier) works just splendidly on the system…AO simply never bothered to sell it that way!